Big News!  Today I put Another Man’s Queen in for publication.  This is my second title and the first one ever to explore themes of cuckolding, adultery, and in general, extra-marital romance.

Now, to be totally honest, I imagine in the ancient world, most noble people who experienced true romantic passion did so outside of the bounds of their marriages.  This sober reality extends to most of the time periods I write in, of course, so it’s a natural place for me to go.

My original intention was to write Isis, the Grecian princess who narrates our trip to the royal court of ancient Thebes, as a timid new bride.  She certainly starts off that way.

But something happened after her first physical encounter with the pharaoh’s handsome son – something I didn’t plan on.  She became empowered, almost aggressively so, and it worked out so well for the story.

As I was writing, I was delighted to learn from one of my beta readers (who happens to be a domme) that an entire community of fetishists center around men who love knowing they’re being cheated on.  That humiliation factor, the stripping of masculinity – it really gets them going.

Isis’s husband, an unnamed second son of the Greek emperor, was such an afterthought for me (and let’s face it, for Isis), that I didn’t even stop to consider that his reaction might be anything other than indifference or outrage.

Let me tell you, writing him on the sidelines, aroused as can be at the idea that his little wife is getting it from this exotic, powerful Egyptian prince did things to my perception of romance that I’d never anticipated.  It also grew into a story that is much longer and more emotionally charged than I’d ever planned for it to be.

Now, let’s put one thing on the table. Romance (not erotica) is an industry that really thrives on traditional relationships. Man, woman, marriage, sex, probably some babies.  The romance novels I grew up with also included the virginal heroine trope. It’s a bright new world where tradition isn’t exactly right, but that singular duo of monogamous bliss remains a constant in the genre. 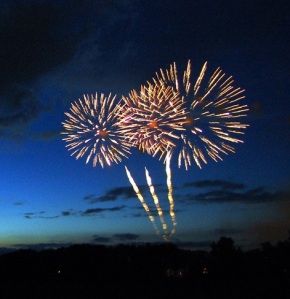 This book created an unprecedented question for me as a romance writer – does Isis want out of her marriage, or does this trio have exactly the right dynamic for everyone involved?

I’ve been thinking all day that it’s perfect that this story particularly will debut on Independence Day (US).  It’s about a woman liberating herself, escaping the tyranny of her marriage for brighter horizons.

Appropriately, Another Man’s Queen is the first in an eventual trilogy.  This idea is just too juicy not to explore in full.  I’ll be thinking about it tomorrow night while I”m watching the fireworks.